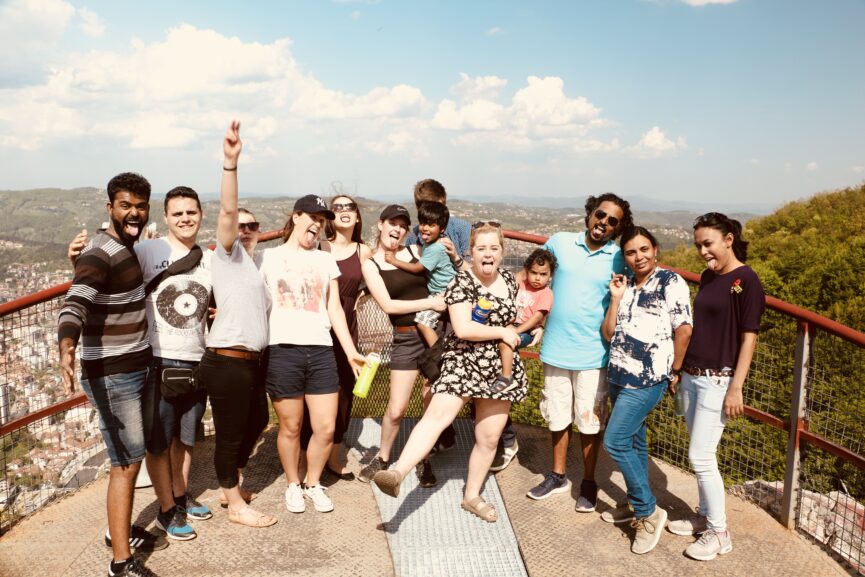 April 29, See Jesus in Others DTS

In front of us at a telescopic distance was the small town of Užice, Serbia.  The shadows of communism seemed still present as we enjoyed the marvelous sight on top of the mountain.  Singing birds accompanied us in a beautiful time of prayer where we asked God to inspire the Serb people with passion towards His Kingdom.

Down that same green mountain lived an abandoned old widow.  It was hard to believe that the room smaller than the standard kitchen was the place she called home. She offered us some coffee, which we kindly refused, while we started to prepare the paint.  It took some effort to tear down the remaining bits of the 30 year old paint that stubbornly clung to the concrete wall. Looking back we can only say that our hard work in the dust was worth the priceless sight of tears of joy running down the wrinkled eyes of the thankful widow.

On the evening of the next day we had a walk in the gray colored city. We met some friends with hopes of doing some evangelism. Sasha, a friendly looking man in his 40s, led us to a small Serbian coffeshop. All one could hear in the bright city cafe was the sound of music, laughter, and English in a very thick Serbian accent. With us was an old man without a job, although he was fluent in seven languages!  He was truly friendly and told me a tear-jerking story about the time he almost got married in Spain. Time went by but we didn’t take notice, for we were in good company.

After leaving that bohemian place we walked beside an old Orthodox Church by nightfall. Arseny, a young musician, told us that his dad was an Orthodox priest. All his life he had known about Jesus, but he didn’t feel like he knew Him until recently. We found a bench beside a quiet river and kept on talking.  He told us that what interested him the most about Christianity was the concept of love.  His greatest hope in life was to one day experience love in its purest form and he wouldn’t cease searching for it until he found it.

Sadly we lost track of time and it was getting exceedingly late.  As I said goodbye to Sasha, he smiled and told me with certainty that we would meet again, just perhaps not on this earth…